What is dental plaque and calculus?

What is gum disease?

Gum disease (periodontal disease) means infection or inflammation of the tissues that surround the teeth. Depending on the severity, gum disease is generally divided into two types – gingivitis and periodontitis. 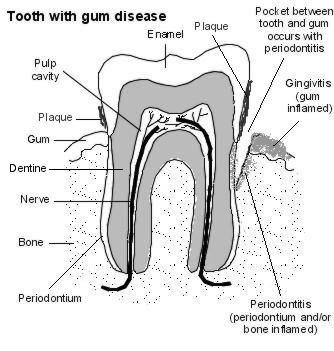 Gingivitis means inflammation of the gums. Most cases of gingivitis are caused by plaque. This is then called plaque-associated gingivitis.

Periodontitis literally means ‘inflammation around the tooth’. It occurs if gingivitis becomes worse and progresses to involve the tissue that joins the teeth to the gums (the periodontium), and/or the supporting bone.

As a consequence of periodontitis, a gap (pocket) develops between the tooth and gum. If left untreated, the tooth may slowly loosen and eventually fall out.

Dentists assess the severity of periodontitis by measuring the depth of the pockets that form between the gum and tooth.

How common is plaque and plaque-associated gum disease?

They are very common. Surveys in the UK in the late 1990s found that:

Most people develop some dental plaque, but not everyone with plaque develops gum disease. Dental plaque contains many different types of germs (bacteria) and some types of bacteria are associated with developing gum disease. The gums can often resist, or limit, the invasion of bacteria. It is thought that a more marked gingivitis, which leads to periodontitis, is more likely to develop if you have a lot of plaque and/or your defence or resistance against bacteria is reduced in some way.

What are the symptoms of plaque-associated gum disease?

An examination by a dentist to detect the presence and depth of gum pockets is needed to confirm the diagnosis of periodontitis.

How can I prevent plaque-associated gum disease?

The measures above are usually sufficient. However, many people also use an antiseptic mouthwash each day which may help prevent gum disease.

What is the treatment of plaque-associated gum disease?

If you have gingivitis

The measures described above to prevent gum disease will often clear mild gingivitis. If gingivitis is more severe, in addition your dentist or doctor may advise an antiseptic mouthwash (and/or antiseptic toothpaste, gel, or spray). These help to kill germs (bacteria) in the mouth and help to clear up any gum infection.

Chlorhexidine is a commonly used antiseptic mouthwash. If you are advised to use chlorhexidine, you should rinse your mouth well with water between brushing your teeth and using chlorhexidine. This is because some ingredients in toothpaste can inactivate chlorhexidine. Chlorhexidine may also stain teeth brown when used regularly. This staining is likely to need to be removed by a dentist or dental hygienist. Staining can be reduced by:

If you have periodontitis

You should see a dentist. In addition to the measures described above to treat gingivitis you may need specialist dental treatment. Various procedures may be done, depending on the severity of the condition and other factors. For example, in one procedure a dentist may clean a pocket next to a tooth where infection is present. Following this, a dentist may smooth out the surface of the tooth next to the gum. This helps the gum to close back on to the tooth, and for any pocket to disappear.

In addition to the benefits to your teeth, good mouth hygiene may have even further benefits. There is some evidence to suggest that poor oral hygiene is associated with an increased risk of developing heart diseases such as:

One research trial followed over 11,000 Scottish people. The trial found that those who reported poor oral hygiene (never or rarely brushed their teeth) had an increased risk of developing a cardiovascular disease. It is not clear if this is a direct cause and effect or simply an association or chance finding. That is, it is not proved that poor oral hygiene can actually increase your risk of cardiovascular disease. However, there is a plausible theory that mild inflammation and infection in the mouth can get into the bloodstream to  trigger mild inflammation in the blood vessels, which, over time, can lead to cardiovascular diseases. Further research is needed to clarify this possible link. But, in the meantime, it may be an additional reason to look after your teeth and gums.